The Chestnut Munia or Black-Headed Mannikin/Munia/Nun

Light grey beak, black head, rich chestnut brown to mahogany body, wings, and tail. Some races have a black belly and a yellow or orange tinge to the tail. Juveniles are a drab cinnamon-brown and are indistinguishable from juvenile White-headed Nuns (L. maja) and juvenile Scaly-breasted Munias (L. punctulata).

Sexes appear similar, but only the cock sings. Cock's head may be bolder and wider with a blunter and heavier appearing bill; his rump may be marginally brighter.

The cock's song sounds like a kitten mewing from a distance. It begins with a series of almost inaudible clicks, followed by an extended whine, then ends in a series of slurred notes.

If you keep this species and have a photo of your birds to share, please submit your photo for possible inclusion on this site! Credit will be given to you.

L. a. sinensis in Singapore. Photo by Jason. 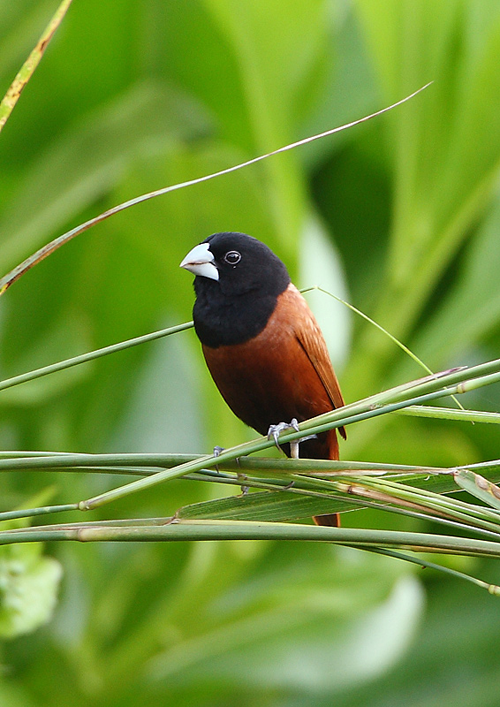 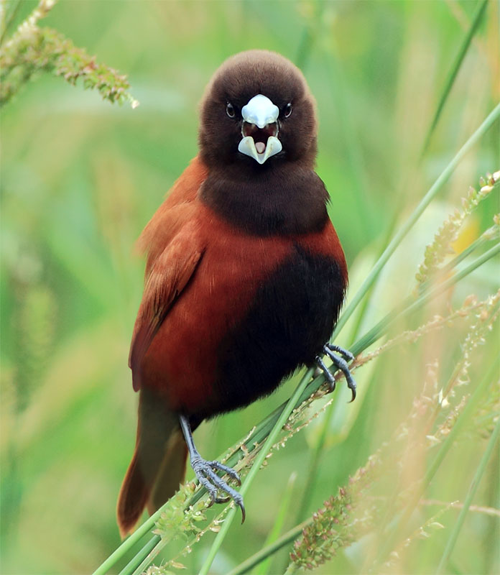 L. a. formosana in Taiwan. Photo by John&Fish.

Black-headed (Chestnut) Munias live in pairs or small flocks when breeding and large social groups outside of the breeding season; they gather in rushes and tall grasses to roost in flocks. Breeding birds and recent fledglings roost in nests. Non-breeding birds may mingle with Spotted Munias. Feeds primarily on the ground and from seeding grasses. Considered a pest on rice paddy fields.

Nails tend to become overgrown, so frequent nail trimming may be needed. As "climbing" birds, Black-headed Munias may benefit from rough, natural perching opportunities in their enclosure such as tall grasses and reeds; additionally, offering coarse flooring material (e.g. flagstone) may help naturally wear the birds' nails. Note that Black-headed Munias have a tendency to strip foliage and can damage aviary plantings. Other potential health concerns include obesity (if housed in too-small a flight or fed too-rich a diet year-round) and intestinal parasites (may need regular deworming due to their ground-feeding habits).

Hailing from the tropics, Black-headed Munias should not be exposed to prolonged temperatures below 41°F (5°C).

In captivity, juvenile Black-headed Munias can commence breeding even when they are only part-way through attaining adult coloration during their first molt. In these cases, the molt ceases until the end of the breeding season, leading to offspring which obtain their full adult coloration before their parents.

May to November in the Indian parts of its range, June to September in Myanmar (Burma), and December to October in Malaysia. Spring-Summer breeding is generally recommended.

Birds aged one to four years are best suited for breeding. The breeding diet should be initiated one month prior to breeding, and should include: ample sprouted seed, egg food, greens, and possibly live food (not required, but may be appreciated).

For best results, keep a group of these birds together to allow the birds to choose their own partners. Males will court females with the use of a song and courtship dance which includes carrying a piece of grass and hopping on the perch beside the hen. Receptive hens will crouch and tail-quiver, inviting copulation. Mating is often followed by bill-fencing and mutual allo-preening. Although colony breeding is possible (in a large aviary planted with tall grasses or a growth of reeds in the corner for the birds to nest in), better productivity may be seen when each pair has its own enclosure.

Nests constructed of dried grass and fine twigs are built in dense reeds, tufts of grass, palm trees, or thick bushes usually between 1 and 2 meters from the ground. Pairs may also accept half-open nest boxes. Both parents share the tasks of nest building, incubation, and chick rearing. Young hatch naked. Pairs seem to tolerate nest checks and exercise nest hygiene where they carry feces from the chicks out of the nest. Parents stop brooding the chicks at around 10 days of age, so it is important to keep the enclosure sufficiently warm at this time to prevent chicks from becoming chilled at night.

Parents may withhold food and call from outside of the nest to encourage fledging. If premature fledging occurs, do not attempt to replace the birds in the nest, but rather ensure the chicks stay warm at night by bringing them indoors or providing a brooder on the aviary floor. After the young fledge, they may continue to sleep in the nest for 1-3 weeks. It is possible to leave the young in with the breeding pair, however, if space limitations require removing the young to their own enclosure, wait until 4 weeks after they fledged to assure independence. Ideally, the old nest should be removed so the parents build a fresh one for the next brood. Birds should be transitioned to an austerity diet when not breeding.

If you own this species and would like to write an article about your experiences with them for this page, please submit your article for possible inclusion on this site. Credit will be given to you!

Has this article helped you? Please consider making a donation to keep FinchInfo.com online and growing!

Disclaimer: As the creator of FinchInfo.com, I take no responsibility for any mishaps which you may experience in following any advice given, nor in purchasing any products suggested. I will therefore not be liable for any consequences that arise from following any advice provided in these pages.

FinchInfo.com is a participant in the Amazon Services LLC Associates Program, an affiliate advertising program designed to provide a means for sites to earn advertising fees by advertising and linking to amazon.com. Proceeds will be used to help this site grow.


©2021 Finchinfo.com. No part of this page (including, but not limited to pictures, articles, advice, logo, or otherwise) may be copied or retransmitted by any means without expressed written permission from the author/creator of this page.

This page is hosted by DreamHost